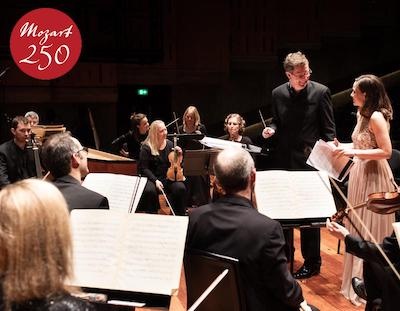 This London-based ensemble is performing and championing the works of Mozart and his contemporaries. They have a concert coming up on 27 January at Cadogan Hall: ‘1772 – A Retrospective’, in which one of our soloists is the celebrated Swiss-Belgian soprano Chiara Skerath.

For more information and to buy tickets, please visit The Mozartists’ website.

Ian Page’s kaleidoscopic MOZART 250 programmes have rapidly become a highlight of the London concert calendar. This typically wide-ranging and illuminating overview of the musical year 1772 features magnificent symphonies by Mozart and Haydn and exquisite arias by such largely forgotten composers as Traetta and Gassmann. Ian Page conducts his dynamic period-instrument orchestra and two outstanding young sopranos – Chiara Skerath has recently made acclaimed debuts at the Salzburg Festival and the Opéra de Paris, while Jessica Cale won the prestigious Kathleen Ferrier Award in 2020

Robert Wylie Lloyd (1868-1958) was a businessman, art collector, entomologist and keen mountaineer, described in his obituary as 'a remarkable and picturesque character who belonged essentially to the Victorian age'.

A chairman of Christie's auction house and vice president of the Alpine Club, his love of the Swiss Alps saw him foster a collection of over 5,000 Swiss prints and books, considered today to be the finest in the world. Along with a magnificent group of watercolours by JMW Turner, he generously bequeathed it to the British Museum in 1958.

Enticing Peaks presents a selection of the finest prints from Lloyd's collection that reveal his admiration for the Alpine landscape and his interest in Swiss customs and mythology.

As well as demonstrating the remarkable skills of 18th and 19th-century Swiss printmakers – who were keen to exploit the market created by burgeoning numbers of tourists – these artworks offer a poignant reminder of how the region has been affected by global warming.

New Delegates to the Council of the Swiss Abroad

The 2021-2025 Delegates to the Council of the Swiss Abroad had been announced and ratified during the FOSSUK AGM on June 19th!

We have launched our own YouTube channel where you will be able to find recordings of our webinars.

"The life and work of Maurice André Kaspar" presented by René Dee on 18th June 2020.

Do you want to receive our next events in your inbox?

Send us an email at info@newhelveticsociety.org.uk with "Newsletter" in the title and we will include you in our distribution list. *

Job Vacancies at the Swiss Embassy in London

Have a look at the vacancies here.

The Swiss Observer: the journal of the Swiss colony in Great Britain, 1930

Your privacy is important to the New Helvetic Society. We will always store your

personal details securely. We will only use them to provide the service that you

have requested, and communicate with you in the way(s) that you have agreed to.

Your data may also be used for analysis purposes, to help us provide the best service

possible. We will never give your information to other organisationsunless we

obtain your approval to do so.