Selection of websites with a Swiss connection 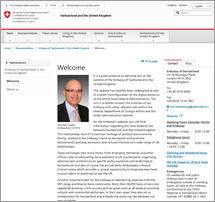 www.swissembassy.org.uk
Here you will find information about events and activities organised by the Embassy throughout the UK as well as important travel and visa information for people planning on travelling to Switzerland, and other relevant facts and figures about the country. 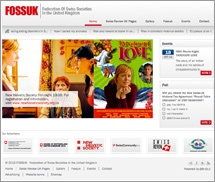 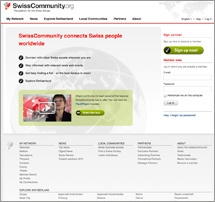 SwissCommunity is a free, high-quality platform exclusively serving the Swiss who have been, are, or will be resident abroad. It is a “club” for international Switzerland, designed and tailored to meet the needs of Swiss people worldwide.

Join SwissCommunity and build up your contacts and links with the Swiss diaspora all over the world, and with Switzerland itself. You will also enjoy an extensive catalogue of offers and services. SwissCommunity is just like you: unique!

SwissCommunity is a global network which keeps Swiss people all over the world in touch. 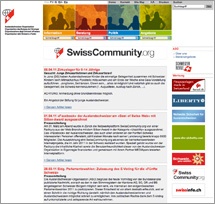 www.aso.ch
The Organisation of the Swiss Abroad (OSA) represents Swiss expatriates' interests in Switzerland. It informs Swiss living abroad about what is happening in Switzerland and provides them with a wide selection of services.

The OSA is supported by some 750 Swiss expatriates' associations and Swiss institutions all over the world. It was founded in 1916 and is recognised by the authorities as the representative organ of the Fifth Switzerland. Information and advice on all types of legal, social security insurance and training matters are also provided by the OSA as well as the magazine "Swiss Review" and a wide variety of activities for young Swiss abroad.

Text can be viewed in English. 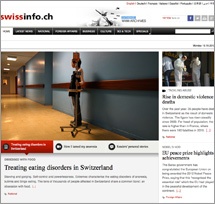 www.swissinfo.ch
swissinfo is an enterprise of the Swiss Broadcasting Corporation (SBC). Its role is to inform Swiss living abroad about events in their homeland and to raise awareness of Switzerland in other countries. swissinfo achieves this through its nine-language internet news and information platform. 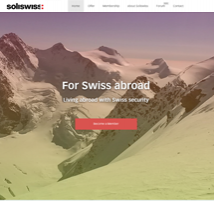